You are here: Home / Archives for Massachusetts Mediation 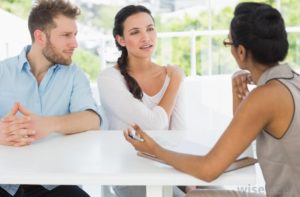 Let’s face it, divorce is messy and painful and can be very expensive. Did you know there was an alternative to make it less volatile and more affordable? Have you heard of mediation?

Mediation is a unique alternative to divorce. It provides a gentler, more productive approach to navigating the tricky legal waters of divorce and usually ends up being less stressful, less costly and easier to move on for the entire family.

This is an edited excerpt by Vicki Shemin in the MCFM quarterly.

It is the true story of a couple that considered divorce, but decided to stay together after drafting a postmarital agreement regarding the parenting of their young son.

Jill and Don wanted to explore alternative dispute divorce options as they believed that their 7- year marriage was irretrievably broken. Arriving at this painful decision was all the more poignant for this young couple since they had a one-year old son.

The manner of a couple’s interpersonal physical proximity speaks volumes about their psychological state of mind. Not only did Jill and Don elect to sit on the same side of the conference room table, they sat so close to one another that their elbows were practically touching. They spoke in hushed and mutually respectful tones and gave the other partner ample time to articulate his and her feelings. Instead of looking at me, they most often spoke directly to one another. As to their communication, the theme most central to both their parallel and collective conversations was their deep love for their son, Alex.

I sensed a distinctive sea change in the couple: perhaps overwhelmed by what actually getting divorced entails, perhaps striking at the heart of any ambivalence they may have felt coming into the process, by the end of the meeting, Jill and Don looked one another squarely in the eye and contemporaneously asked each other – “Is this what we really want to be doing?”

Jill and Don left our office that day very different individuals from the two who had walked in just an hour and a half before. They wanted me to draft a document which would lay out the details of their co-parenting plan for their son if and when the marriage did end in separation or divorce one day. If divorce became a reality; if that day ever came, they did not want to be making decisions concerning Alex borne of spite, anger or vengeance.

Over the months, Jill and Don worked hard on hammering out the details of a Custody and Parenting Agreement which addressed matters such as legal custody and a very detailed coparenting schedule (including summer and holiday schedules), as well as a provision anticipating the use of a Parenting Coordinator as a mediator/arbitrator to facilitate the couple with parenting decisions.

In mid-March, I heard from Jill. The email said: “Don and I are in a good place in our relationship right now, and I feel we will be in an even stronger now that this Parenting Agreement is behind us. We sincerely thank you in advance for your patience and understanding and for showing us there was another way to move forward in our lives.”

In a period of six months, this family had beaten the odds and stayed together.

Fields and Dennis LLP is pleased to announce that Jonathan Fields will be speaking on the topic of “Mediation Challenges for the Family Law Practitioner” in Wellesley on April 8th.

He, along with Kate Fanger, Esq. and Ellen Waldorf, Esq., will be presenting on behalf of the Massachusetts Council on Family Mediation (MCFM) at the Wellesley Public Library.

Jon recently completed a two-year term as President of the MCFM and continues to serve on its Executive Board, as he has since 2005. With extensive experience as a neutral, he is well-versed in the rewards and challenges of family law mediation, and he has successfully mediated many family law disputes between couples.

The event is from 2 – 4 p.m. Please contact Jonathan Fields for additional details or if you wish to discuss this topic.

Thanks to the Massachusetts Association of Guardians Ad Litem (MAGAL) for inviting Attorney Jonathan Fields to speak at their annual conference on November 7 on high-conflict cases in litigation and mediation.  The keynote speaker, Bill Eddy, was terrific.  The title, too, was excellent– “I’m OK, You’re a X$!#@&%!!!: High-Conflict Behavior in Family Law Cases.”

Mediation is a tool that can be invaluable to families. At Fields and Dennis, we are well-versed in all aspects of Family Law, and we often turn to mediation as an agreeable and less distressing means to an end.  There are many ways that mediation can benefit families at various stages of life. From divorce to estate planning and everything in between, mediation can be an indispensable tool to quell interfamilial tensions and disputes.

If this were a game of Family Feud (Instances a family may call upon a mediator…) ‘divorce’ and ‘estate planning’ may very well be the top two answers on the board, but there are a variety of times when the services of a mediator may benefit a family unit. Read More.

The most recent professional development meeting, “Collaborative Law and Mediation Tools and Techniques: A Common Ground” was a product of the joint committee of the MCFM and the Massachusetts Collaborative Law Council chaired by our own Lynn Cooper.  The panelists, in addition to Lynn, were Dan Finn, Kate Fanger, Karen Levitt, and Lisa Smith.

The committee was created in order to foster close reciprocal relationships between the organizations – and we are succeeding.  As a result of the committee’s efforts, for example, we are now cross-promoting each other’s events.

Being trained in the two disciplines has informed the way I practice both.

In any event, I think all of us can agree that the communities have a lot to teach other.  I look forward to more of these joint ventures in the future.

From the Family Mediation Quarterly

On November 16, the Massachusetts Council on Family Mediation held its annual Fall Institute to a sold-out audience at the Wellesley Community Center. As the President of MCFM, Jonathan Fields was honored to be the first speaker at the opening plenary session. The topic blended an update of family law with a discussion of what role the law plays in mediation. The discussion it prompted was lively and informative and set the tone for an excellent Institute.

On September 13, as most of you know, MCFM marked an important milestone – our 30th anniversary. We honored the occasion with an event at the Endicott House in Dedham. Thanks to the organizers (in alphabetical order – Lynn Cooper, Barbara Kellman, Diane Spears, Laurie Udell, and Fran Whyman,) it was a well-attended and unqualified success. Quite a few of us talked briefly to the gathering and I was one of the speakers. Les Wallerstein, editor of FMQ, asked me to submit my talk for publication. I asked him if it could “count” as my President’s Letter for the quarter and he agreed. With that understanding, Les, here it is…
To read MCFM President Jonathan E. Fields blog post, please copy and paste the following link into your browser:

The Family Law Section is designed to improve the Probate and Family Court’s accessibility and efficiency to benefit lawyers, judges, staff and the public by offering educational seminars, providing updates on legislative activity, and facilitating bench/bar networking opportunities. “I am pleased and proud to be serving on the MBA’s Family Law Section Council during […]

The interplay between inheritance, trusts, and divorce raises a series of issues every estate planning and family law attorney must be prepared to address. What steps should estate planning attorneys take to protect assets prior to or in anticipation of divorce? What is the procedure for courts to value a trust interest for purposes of […]

It is a tremendous honor to announce that Jonathan E. Fields has been selected by Best Lawyers. This honor is bestowed on him by both his clients and peers. Best Lawyers was started four decades ago by two Harvard Law Graduates and is one of the most prestigious peer review publications. Their Lawyer lists are […]

It is a tremendous honor to announce that Sheryl J. Dennis has been selected by Best Lawyers. This honor is bestowed on her by both her clients and peers. Best Lawyers was started four decades ago by two Harvard Law Graduates and is one of the most prestigious peer review publications. Their Lawyer lists are […]