You are here: Home / Archives for Child Support

Family bar on board with new child support guidelines

Family law attorneys say the revised child support guidelines that went into effect at the beginning of October provide needed clarity and consistency in the determination of parental payment obligations.

Trial Court Chief Justice Paula M. Carey unveiled the new guidelines in early August. The revisions address a wide range of issues, highlighted by an increase from $250,000 to $400,000 in the maximum combined available income level for the parties in a case, clarification of the treatment of alimony as income in the calculation of support, and clarification of the types of Social Security payments to be considered in the calculation.

Lynette Paczkowski of Worcester said the revisions reflect the economic realities of living and raising children in Massachusetts.

Jonathan E. Fields, a Wellesley attorney who served on the task force that recommended revisions to the child support guidelines that went into effect in 2017, also lauded the new changes.

A little background first. The dependency exemption was $4,050 per “qualifying child” in 2017 – which meant that, to someone with a 35% effective tax rate, it was worth about $1,400. It was available to most taxpayers as it only began to phase out for single filers at adjusted gross incomes of $261,500.

Subject to a multiplicity of factors beyond the scope of this short article, the “qualifying child” was one who reached the age of majority according to the state in which the child is domiciled. Most states recognize 18 as the “age of majority” – which is the age at which state residents are legally considered adults. The age at which a minor child qualifies to become emancipated (meaning that the minor is no longer legally under their parents’ care, and that they will have all of the rights, responsibilities, and privileges of someone who has reached the age of majority) varies from state to state.

The Child Tax Credit, as noted above, attached to whoever had the dependency exemption – and the TCJA doesn’t change this.  However, until TCJA, the Child Tax Credit ($1,000 per child in 2017) began to phase out for single filers at adjusted gross incomes of $75,000 – so many divorce lawyers who deal with higher net worth clients never really confronted it.

The Child Tax Credit is More Valuable Under the TCJA

The TCJA made the Child Tax Credit more valuable, doubling it to $2,000 per “qualifying child” and making it available to most taxpayers; it only begins to phase out for single filers at adjusted gross incomes of $200,000. And, unlike the dependency exemption, it’s a credit: that is, it applies dollar-for-dollar against any taxes owed. Even better, it’s a refundable credit of up to $1,400 per child. This means that if the amount of the credit is larger than the tax owed, then the taxpayer gets a cash refund for the difference (up to $1,400).

The bottom line: if you’re going through a divorce, make sure you and/or your lawyer have a good handle on how the new tax law has impacted this area. You don’t want to leave valuable dollars on the table. 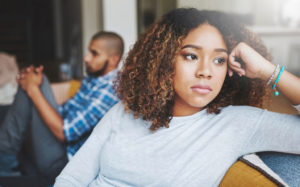 Female breadwinners are ponying up for their exes more than ever.

A recent American Academy of Matrimonial Lawyers (AAML) survey found that more than four in 10 lawyers (45%) had seen an increase over the past three years in women being on the hook for alimony, aka spousal support or maintenance. Meanwhile, 54% said they’d seen a rise in mothers paying child support… 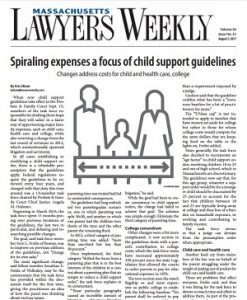 When new child support guidelines take effect in the Probate & Family Court Sept. 15, members of the task force responsible for drafting them hope that they will usher in a fairer way of apportioning major family expenses, such as child care, health care and college, while also reversing a change from the last round of revisions in 2012, which unintentionally spawned litigation and acrimony.

In all cases establishing or modifying a child support order, there is a rebuttable presumption that the guidelines apply. Federal regulations require the guidelines to be reviewed every four years, and charged with that duty this time around was a 13-member task force chaired by Probate & Family Court Chief Justice Angela M. Ordonez.

The most significant change, said fellow member Jonathan E. Fields of Wellesley, may be the commentary that the task force has provided within the document itself for the first time, giving the practitioner an idea of how the panel was thinking about various issues.
Beyond that global change, however, there are also some important details. The full text of the 20-page guidelines can be found at masslawyersweekly.com.

Jonathan Fields is a family law attorney with extensive experience mediating, negotiating, arbitrating and litigating family law matters, as well as publishing and presenting on matters related to family law. In 2016 he was appointed to the Massachusetts Trial Court Child Support Guidelines Task Force. The guidelines are updated every 4 years, and this year, there are plenty of changes family law professionals and divorcing parents should be aware of, from college contributions to unreported income. Check out the reference guide for the new Child Support Guidelines, or join Mr. Fields at the Child Support Guidelines Workshop at MWI, August 22, 2017 from 2:30 PM – 4:30 PM.