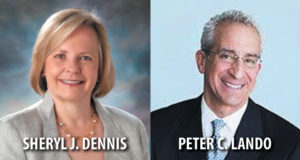 Though the Boston market has been rocked by reports of BigLaw firms cutting pay and staff in response to the coronavirus emergency, pink slips seem to be few and far between for some smaller firms with niche practices.

The public health emergency has kept Sheryl J. Dennis and five other attorneys at the Wellesley Hills firm of Fields & Dennis plenty busy handling family law and estate planning matters. According to Dennis, her firm had one of its most profitable months in March — despite the coronavirus outbreak.

The intellectual property firm Lando & Anastasi moved its offices from Cambridge to the heart of Boston’s Financial District on March 1 — just as the American public was beginning to grasp the scope of the coronavirus threat.

“We’re not thinking of any cuts,” Lando says. “Things look strong, given the circumstances. We’re open to hiring. We’re in discussions with folks at the moment.”

Meanwhile, news of belt-tightening at BigLaw firms with Boston offices is coming at an accelerated pace.

Above the Law reported on April 7 that Brown Rudnick was furloughing a number of associates, cutting associate pay for several months by “7.5 percent on an annualized basis,” and deferring payment of 2019 associate bonuses. The firm reportedly was also cutting equity draws by partners.

“Brown Rudnick has taken expense management steps during these uncertain times,” Chairman and CEO William R. Baldiga said in an emailed statement to Lawyers Weekly. “The firm is dedicated to its lawyers and staff and has implemented a proactive plan to maintain the strong financial standing of the firm that does not involve layoffs.”

On March 30, the ATL website reported that Womble, Bond, Dickinson had implemented a number of cost-cutting measures, including laying off associates and furloughing staff. The steps reportedly included 10 percent pay cuts for anyone making over $100,000, with smaller reductions for employees in lower salary ranges.

In an emailed statement to Lawyers Weekly, the firm confirmed that it had made the “hard decision” to furlough some employees and “let go” others.

“In addition, we are temporarily instituting a 10 percent or less pay reduction (with lower levels of compensation reduced by smaller percentages) for our remaining staff and attorneys, in addition to a more substantial partner compensation reduction,” the Womble statement said. “Decisions like these are never easy, but we believe taking these steps now will curb the negative economic impact of the COVID-19 pandemic and keep our firm strong and well-positioned to continue serving our clients at the highest level.”

On April 1, the ATL website reported that the March equity partner distributions at Arent Fox had been reduced by 60 percent. Meanwhile, the firm reportedly had reduced by 30 percent the salaries of nonequity partners and counsel, and cut by 25 percent the pay of associates and staff.

In a statement, the firm confirmed it had made “temporary adjustments” to its business operations in responding to the “economic disruption” caused by COVID-19.

“Firm leadership is closely following these significant events and recognizes that the biggest financial risk to a law firm is underreacting,” the Arent Fox statement said. “In response to the economic slowdown, the firm is instituting a temporary pay cut for all attorneys, professionals, and staff.”

Nixon Peabody made the headlines on April 3, reportedly furloughing 25 percent of staff effective April 6. Nixon Peabody did not respond to a request for comment.

Lando attributes his own firm’s strong position to having a diversified practice.

“We have a good, diversified portfolio in our client mix,” Lando says. “That helps in these times.”

Lando says he sometimes finds large firms to be “over-reactive” in responding to the market on issues such as associate pay and raising rates. He questions whether the recent wave of layoffs and pay cuts may also represent an over-reaction in a time of crisis.

“I was surprised by the quick and drastic action that many have taken,” Lando says, noting that BigLaw firms tend to take their cue from what others in the market are doing.

“They follow one another,” Lando says. “It’s as if one firm takes the lead and they all chase. They’re deferring partner pay, cutting expenses, and cutting head count across the board. These are pretty drastic measures.”

What’s often “missing in the picture,” he adds, is the fact the decisions impact individuals with families.

“I trust that they’re not making these decisions cavalierly, but I do get concerned about the wild swings I see,” Lando says.

Dennis admits she has concerns for her practice should the public health emergency last for more than three months. But assuming the coronavirus crisis is of relatively short duration, Dennis is confident that her firm will “weather the storm.”

“And on the other side of it, I think we’re going to be busier than ever,” she says.