You are here: Home / Postnup / Prenups & postnups: the dawning of sunrise/sunset clauses

by Vicki L. Shemin (as published in the September/October Issue of Massachusetts Lawyers Journal. 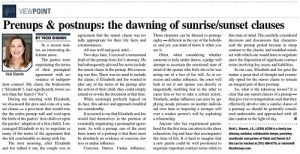 In a recent matter, an interesting dilemma arose.

The parties were negotiating the terms of their prenuptial agreement with assistance
of independent counsel. My client, the bride-to-be (“Elizabeth”), had significantly fewer assets than her fiancé (“Joe”).

During my meeting with Elizabeth, we discussed the pros and cons of a sunset clause — a provision that would render the entire prenup null and void upon the birth of the parties’ first child (or upon
the parties’ adoption of a first child). I encouraged Elizabeth to try to negotiate as many of the terms of the agreement that she felt comfortable so doing with Joe.

The next morning, after Elizabeth and Joe talked it out, the couple was in agreement that the sunset clause was totally appropriate for their life facts and circumstances.

All was well and good, until… Two days later, I received a turnaround draft of the prenup from Joe’s attorney. He had subsequently advised Joe not to include the sunset clause in the prenup. His reasoning
was this: There was no need to include the clause; if Elizabeth and Joe wanted to alter any of the terms of the prenup after the arrival of their child, they could simply amend or revoke the document at that time.

While seemingly perfectly logical on its face, this advice and approach troubled me considerably.

It occurred to me that Elizabeth and Joe would find themselves in the position of essentially negotiating a postnuptial agreement. As with a prenup, one of the most basic tenets of a postnup is that there must be absolutely no evidence of coercion, duress or undue influence.

Coercion. Duress. Undue influence. Those elements can be likened to pornography — different in the eye of the beholder, and yet, you kind of know it when you see it.

Often, when considering whether someone is truly under duress, a judge will attempt to ascertain the emotional state of mind of the spouse who feels she or he was acting out of a loss of fee will. As to coercion and undue influence, the court will look to see if one spouse was directly or tangentially instilling fear in the other to cause him or her to take a certain action. Similarly, undue influence can arise by applying steady pressure on another individual over time or imposing a stronger will
over a weaker person’s will by exploiting a relationship.

Anyone who has experienced parenthood for the first time can attest to the sheer exhaustion, fog and haze that accompanies this time of life. It is hard to imagine that a new parent could be well positioned to negotiate important contract terms while in this state of mind. The carefully considered
decisions and discussions that characterized the prenup period become in sharp contrast to the chaotic and muddled mindset with which one would have to negotiate anew the disposition of significant contract
terms involving key assets and liabilities.

In our case, Elizabeth and Joe gave the matter a great deal of thought and eventually opted for the sunset clause to remain an integral part of their postnup.

So, what is the takeaway lesson? It is clear that any sunset clauses of a prenup — that give rise to renegotiation such that they effectively devolve into a sunrise clause of a postnup — should be generally considered undesirable and approached with all due caution in the light of day.

Vicki L. Shemin, J.D., LICSW, ACSW is a family law attorney, mediator, collaborative lawyer, parenting coordinator and partner at Fields and Dennis LLP. She can be reached at (781) 489-6776, or vshemin@fieldsdennis.com.