Considered a prominent example of what a quintessential New England town looks like, Holliston is located in Middlesex County amid white antique colonial, Greek revival and Victorian style homes and a local General Store. Holliston started its journey to this image through its settlement in 1659 and incorporation in 1724 by a group of Massachusetts Bay Puritans. Over the town’s history, it has been home to a slew of notable figures such as former Republican state representative Paul Loscocco, National Television Personality John Sencio, actor Bryan Greenberg, and center for the NHL’s Columbus Blue Jackets Greg Mauldin.  Bordering Holliston today are the residential communities of Sherborn, Millis, Medway, Milford, Hopkinton, and Ashland, as well as Norfolk and Worcester counties.

Named after Thomas Hollis Esq. of London, a benefactor of Harvard University, Holliston started off as a small farming community and also became known as one of the largest shoe makers in the United States. Moving into the later nineteenth century, Holliston’s identity began to shift into that of a bedroom community with its residents working in Boston and along the Route 128 Technology Belt.

Today, Holliston hosts a number of annual events that celebrate the town and its residents such as with Celebrate Holliston Day and the Holiday Stroll, along with a variety of summer concerts, craft fairs and festivals. The community of Holliston is also fortunate in the abundance of natural and historic sites surrounding the town. One of Holliston’s most well-known natural features is the Balancing Rock, which General George Washington is rumored to have attempted to push off its central point but to no avail. Furthermore, Holliston residents can enjoy local spots such as Lake Winthrop, Factory Pond, Outpost Farm, Highland Farm, Fatima Shrine, Brentwood Conservation Land, Patoma Park, Goodwill Park, Upper Charles River Trail, Pleasure Point, Stoddard Park, and Pinecrest Golf Club. In addition, history enthusiast can benefit from Holliston’s significant number of historic districts such as Mudville, Braggville, Metcalf, Phipps Hill, Gooch’s Corner, Strawberry Hill, Lakeside, and Downtown Holliston. Even a walk down Winter Street, one of the oldest and longest streets in Holliston will bring a person back to simpler times while strolling past homes from hundreds of years ago. Holliston is served by Sam Placentino Elementary School, Fred W. Miller Elementary School, Robert H. Adams Middle School, and Holliston High School. The town of Holliston can also be reached by way of I-95, I-90, and by Routes 16 and 126. 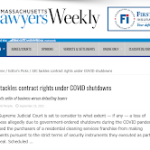 The Supreme Judicial Court is set to consider to what extent — if any — a loss of business allegedly due to government-ordered shutdowns during the COVID pandemic excused the purchasers of a residential cleaning services franchise from making payments pursuant to the strict terms of security instruments they executed as part of the deal. […] 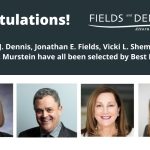 Fields and Dennis LLP, is proud to have 4 lawyers recognized by Best Lawyers® in 2023 in America. It is a tremendous honor to announce that attorneys Sheryl J. Dennis, Jonathan E. Fields, Vicki L. Shemin, and Wendie E. Murstein have all been selected by Best Lawyers®. Since it was first published in 1983, Best Lawyers® has […]

School is starting up again soon. Do you know a student or young professional over the age of 18 who could use the Fledgling Plan. This estate plan includes a Will, HIPAA Authorization, Health Care Proxy, and Power of Attorney for a single person at an affordable rate. For more information please visit the link […] 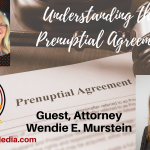