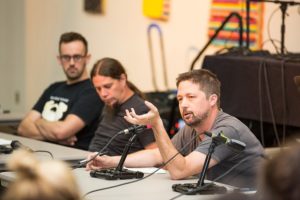 Joshua Baish looks uncomfortable in his orange jumpsuit as he tells his story in a video conference call at the Denton County Jail in early August. Fifteen video monitors line the walls inside the small visitation room, and nearly all of them are in use this Sunday afternoon. Several children patiently wait to see their fathers, who are behind bars for various reasons, since a video call won’t connect until a minute before each meeting.

No one is waiting to see Baish, who says he hasn’t seen his 4-year-old twin daughters since the judge sentenced him in late July.

In June, he drove to his ex-wife’s house on Father’s Day to pick up his daughters for a weekend visit and was met by two Denton police officers and a freshly filed temporary restraining order. “The accusation?” he wrote on Facebook. “I was forcing Lily to be a boy. And that it constitutes abuse.”